Posted About Five Years Ago by WHPO

SPRINGFIELD, IL – Illinois State Police (ISP) Director Leo P. Schmitz regretfully announces that ISP Trooper Ryan Albin, star number 5718, was tragically killed today while on patrol.
Today at approximately 3:10 p.m. Trooper Albin was involved in a crash on I-74 near Farmer City.  Trooper Albin sustained serious injuries as a result of the crash.  At approximately 8:45 pm, Trooper Albin succumbed to his injuries.
“Our hearts are heavy with grief as we mourn the loss of Trooper Albin,” stated Director Schmitz.  “I extend my deepest sympathy to Trooper Albin’s family, friends, and co-workers.  I pray that those who cared for and loved him find the strength they need during this most difficult time.  No further words can express the pain and loss we are all feeling.”
Trooper Albin joined the ISP on January 8, 2006.  He was assigned to District 6 in Pontiac as a canine officer.  Trooper Albin’s canine partner, “Biko,” was in the rear of the squad car at the time of the crash.  Biko was transported to a local veterinarian’s office and appears to have sustained only minor injuries.
The crash remains under investigation. No additional information is available at this time. 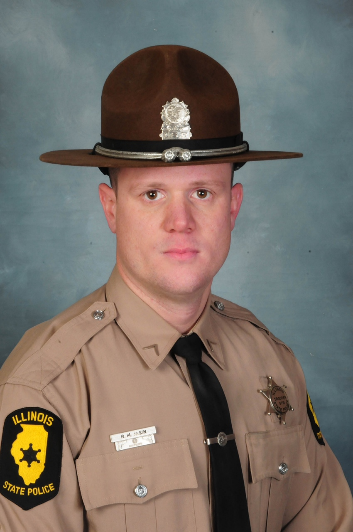